/press/who-you-gonna-call-an-exterminator-dumps-the-chemicals-and-gets-creativetesting Who You Gonna Call? An Exterminator Dumps The Chemicals And Gets Creative Utne Reader 2008

Who You Gonna Call? An Exterminator Dumps The Chemicals And Gets Creative Utne Reader 2008

Who You Gonna Call?

An exterminator dumps the chemicals and gets creative 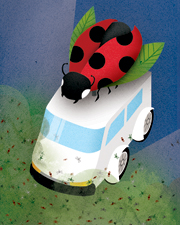 Using a stethoscope in a hospital is not a strange thing to do, unless, of course, you’re in the pest control business, which Luis Agurto is.

Agurto, owner of the San Francisco–based pest control company Pestec, stands on a ladder and presses his stethoscope to the wall. He has the pensive look of a doctor listening for signs of arrhythmia, but Agurto has his ears peeled for a different murmur: the buzz of bees. There’s a sign on a nearby windowpane—Do Not Open—and behind the glass a swarm is setting up shop in the decaying wood frame of a window in the city-run Laguna Honda Hospital.

Below Agurto, his son Carlos, 23, arms himself with a power drill. Carlos’ brother, Luis Jr., 25, starts pumping the Foamer Simpson, a two-gallon jug with a strawlike nozzle that holds a mixture of sodium lauryl sulfate and water—which is no different from standard shampoo base, minus the fancy fragrance.

Agurto tailors each pest control solution to the problem at hand, and the plan today is to drill through the window frame, stuff the hive full of soap, and remove the nest from the wall. More unseemly pests, roaches, for example, the Agurtos bait with a blend of boric acid and sugar. No Raid here.

This environmentally friendly approach just makes sense to Agurto, who immigrated to the United States from Nicaragua in 1979. Every use of pesticides puts money into the hands of chemical manufacturers. Every job he does using a little creative problem-solving—drawing on decades of experience and an understanding of entomology that would put most biologists to shame—keeps more dollars in the coffers of his small business.

Earlier, Agurto and Luis Jr. made a stop to check up on some employees who were burying gopher traps along the Junipero Serra Greenway as part of Pestec’s contract with the city of San Francisco. The team lays traps, waits a few hours, then removes the gophers. The alternative would be to seed the grass with poison, but then poisoned rodents get picked off by neighborhood dogs and predatory birds, which in turn ingest the chemicals.

Pestec’s annual $900,000 contract with the city accounts for 50 percent of Agurto’s business. When he’s not busy rodent-proofing City Hall, deploying a fleet of bike messengers to drop mosquito control into storm sewers, and sniffing out bedbugs with Ladybug, his highly trained beagle, Agurto lectures on integrated pest management, consults for other pest control firms, and quizzes Luis Jr. on ways to solve hypothetical pest control problems.